How Much Does an Arcade Machine Cost?

You might be wondering, how much does an arcade machine cost? We’ve got your back. Read our helpful guide to find out everything that you need to know!

Arcade games were a staple of gamer culture a few decades ago. In fact, they were often the only way most people could play videogames.

Recently, though, arcade games have begun to see a resurgence. Alongside retro fashion, people have developed an itch for old videogames in order to satisfy their craving for nostalgia.

But, even though these machines are outdated, they often aren’t cheap. Those who are looking to buy one may not know what to expect when it comes to arcade machine cost.

Not sure where to start? Don’t worry, we’ve got you covered.

Let’s take a look at everything you need to know.

So… What’s The Price?

In order to realistically estimate the price of an arcade machine before you buy one, there are several factors about it you’ll need to consider. For example, some arcade games come equipped with only a joystick and two buttons, while others have seats, steering wheels, etc.

Read on to learn more about the different types of popular arcade games you need to keep in mind.

As you may expect, an arcade machine that comes complete with things like scoreboards, basketball hoops, etc. will likely cost a lot more than a standard cabinet that allows two players to face off in a fighting game.

So, keep in mind that most sports-related games will often fall on the higher end of the price range.

While not quite as complicated as sports games, prize games can have a large handful of moving parts and electric components that add to their cost. Many prize games, though, are relatively simple when it comes to hardware.

Many of them are mostly glass (in order to keep the visibility of the prizes high), so you won’t find yourself having to accommodate a large, intricate machine.

A staple game type of any arcade, these machines fall somewhere in the middle in terms of price. The real cost comes from how expensive the light guns are material-wise. More intuitive guns will also add more to the cost of the machine.

A standard cabinet with a pair of rifles won’t be exorbitantly expensive. On the contrary, though, a machine with seats and large, mounted light guns will cost far more.

The most simple type of cabinet you’ll find is a videogame arcade machine. In fact, this was the first kind to ever exist!

These are often on the low-to-mid part of the price spectrum. However, it’s fairly easy for a unique or discontinued machine to cost exponentially more than other games of the era.

The sheer size of the machine coupled with the software often leads to a price of at least a few thousand dollars. Modern driving games (especially ones with large followings like Mario Kart) will cost even more.

As you may expect, these are among some of the most expensive. The sheer weight of the machine and all of the components heavily contribute to the cost, as does the popularity of dance games.

Older models may be even pricier, as they may contain content or exploits that newer machines of the same game do not.

Other Factors to Consider

In addition to the type of game that you’re looking for, there’s a handful of other factors that contribute to its cost. Let’s take a look.

As with any other product, less supply will lead to a greater price if there is a demand for it. So, older machines with a low total volume or those that were discontinued will likely cost more (even if the games are relatively simple).

Sometimes, there are arcade games unlike any other. The game ‘Splatterhouse,’ for example, was released during a period of lax censorship and is known for being notably violent.

While the machine itself is a standard videogame cabinet, its uniqueness (and eventual discontinuation) contributes to its high price.

Games like Galaga, Space Invaders, and Pac Man will always come with a hefty price tag despite their simplicity. These games are widely recognized as classics of the genre and have become a sort of collectible in some cases.

Original releases of these machines (or those that were held at famous arcades, used in tournaments, etc.) will likely be out of most people’s budgets.

Sometimes, you don’t need arcade games for an indefinite period of time. You may only need them for an evening or weekend (such as during a fundraiser or celebration).

So, renting arcade machines instead will save you thousands of dollars and allow you to avoid finding a buyer who lists their machine at a reasonable price.

But it doesn’t have to be.

With the above information about arcade machine cost in mind, you’ll know what to expect when it comes to price and likely be able to find one that fits your budget.

Want to learn more about how we can help? Feel free to get in touch with us today to see what we can do. 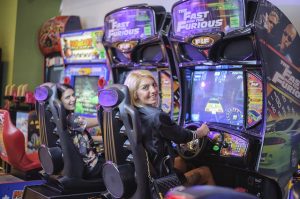